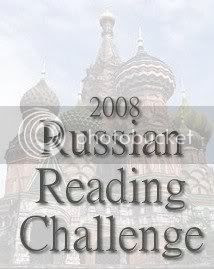 for Sharon's 2008 Russian Reading Challenge. We're to read at least four over the course of the year.

A quick scan of the shelves gave me today's Thursday Thirteen:

I'm tempted to warm up to the challenge by reading Clair Huffaker's The Cowboy and the Cossack at some point this fall--a 4,000-mile cattle drive across Siberia sounds good to me.

And if anyone is interested in another set-in-Russia but written by a non-Russian, may I recommend James Meek's The People's Act of Love?

Its setting is an isolated village in Siberia near the end of the Russian revolution. A small band of Czech soldiers stationed there would like to return home, but their captain's gone insane and prefers to stay. Most of the villagers are religious castrates; their leader, however, had been married before his conversion, and his beautiful, angry "widow" and their son have now taken up residency in the town. Into the mix comes Samarin, an escaped political prisoner from a remote camp, telling of a fellow excapee who'd intended to cannibalize him and is fast on his heels.

One of my favorite books from last year, most definitely.
at October 11, 2007