It's been like the night before the night before Christmas around here all weekend, folks. Tuesday's the release date for Dwight Yoakam's latest cd, Three Pears. And since it's been a long seven years since the last cd from my favorite fella, I've had that baby pre-ordered for months.

I've been so excited that I couldn't help myself this morning. When I saw that L. had some pears out for juicing, I co-opted three of 'em for a photo op in honor of the album cover. 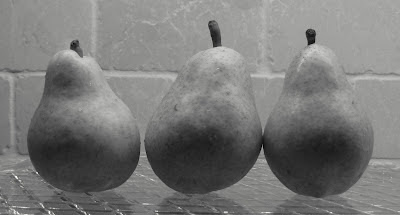 I've been listening to on-line early releases of several of the songs:

Three Pears itself (Following Dwight's incontrovertible thought process, this is a song inspired by John Lennon's three pairs of shades)

Nothing But Love (Jay Leno performance)

And Dwight's been on NPR, talking about the new songs.

The weekend in reading

Start Saturday with a cup of coffee and Majgull Axelsson's April Witch. Mentally berate yourself for having this book unread on your shelves for the past decade. Decide you really ought to read Ray Bradbury's story "The April Witch," which was an inspiration for the Axelsson novel.

"The April Witch" isn't found in the Bradbury collection you own. Take to the internet to determine where you can find it. Check local library catalogs for The Golden Apples of the Sun, attempting to place a hold on the latest James Meek, The Heart Broke In,  while you're at the public library site. When you can't find it, go to Amazon and pre-order it.

Determine that you can find "The April Witch" incorporated into the Bradbury novel From the Dust Returned. Write the LC call number from the university library catalog on a scrap of paper and stick it in your back pocket.

Run by the public library on your way in to work and pick up Zadie Smith's latest, NW.

At the university library, go up to the tower for Bradbury. Your eye snags on a Virago Modern Classics version of Kay Boyle's My Next Bride nearby. Read the back cover --hmmm, it's largely autobiographical--then take both books back downstairs with you.

Start the Bradbury while eating your sandwich at lunch. Read up to the chapter that introduces the April Witch.

While working at the circ desk, follow a link to a John Jeremiah Sullivan essay that touts Guy Davenport. Recollect having The Geography of the Imagination on your wishlist some time back. Check the catalog. Go to shelves and pull both Geography and a story collection, The Jules Verne Steam Balloon.

Back at the desk, find a scrap of paper in your very own handwriting tucked in the card sleeve at the back of the essay collection. Evidently, you've checked Geography out before, along with Salvation on Sand Mountain, whose title and call number are also on the scrap of paper. Has no one else checked out these books since the last time you had them?

Think about going back up in the tower to get the Covington (because no, you didn't get it read the last time you checked it out). Decide you've already met your quota on Appalachian snakehandling books for 2012. Another year.

Stick that particular scrap of paper back in the card sleeve. Stick the scrap paper with several other books recommended by John Jeremiah Sullivan into the back of The April Witch.

Read "No, But I've Read the Book" and "The Anthropology of Table Manners from Geophagy Onward" from the Davenport.

Check Amazon to see if either the Kim Stanley Robinson, 2312, or the A.L. Barker, A Source of Embarrassment, ordered last Sunday, have shipped yet. Nope.

Read the April Witch chapters. Note that she's called a last-of-summer witch, not an April one, as you presume she must have been in the story version.

Read book blogs for awhile. Read through "The Homecoming" chapter in the Bradbury.

Read a few more pages of the Bradbury after returning from hearing Pete Anderson at the Double Door.

Sunday morning. A few more pages of Bradbury, including the afterward. Mademoiselle magazine put out an October issue centerpieced around "The Homecoming." Bradbury says that Kay Boyle wrote one of the essays in the October issue; in fact, she's the only writer he mention by name. Serendipity!

Read the threads at Book Balloon, where you find a link to a Philip Hensher review of Zadie Smith's NW (will read this later). Due to a glowing endorsement at BB, realize you must read Alice Munro's "Labor Day Dinner" immediately. Fortunately, you have The Moons of Jupiter on hand, so you can do just that.

You've had Amazon Prime since the day after you ordered the Barker; it still feels like a new pony in need of proper exercise. You also have enough remaining credit card rewards points to cover Every Love Story is a Ghost Story. Plus your husband dumped wheat grass seeds in the sink while you were soaking the exhaust fan grids this afternoon and he hasn't been nearly remorseful enough. Click.

Where has the day gone? All you want to do now is read Majgull Axellson. Why haven't any of her other books been translated into English?

You close out the weekend with a bowl of pop corn and The April Witch.