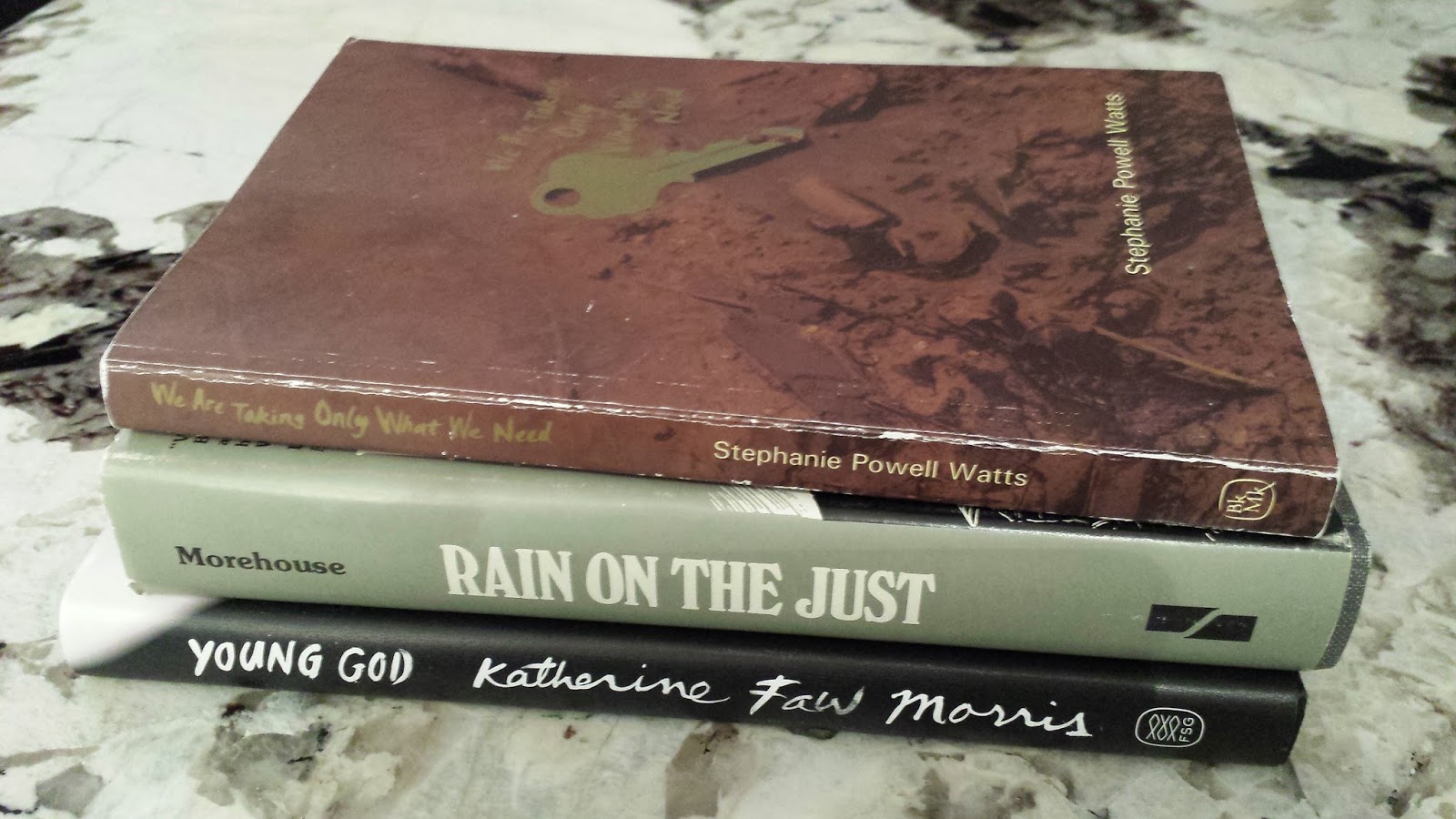 I am making it a priority to read-- and blog about (there's the rub)-- the Wilkes County component of my Some Dark Holler project this summer.

First up, because it's already generating so much buzz back in Wilkes that my mother-in-law asked me to buy her a copy, is Katherine Faw Morris's just-published Young God.

Typically, Young God would have found publication as "Young God." It's not quite 80 pages worth of words spread out over a little less than 200. It would have been the long story/novella in a collection that I could imagine easily evolving into a kind of Mary Gaitskill-ish Bad Behavior of the Appalachian foothills.

But take a crack literary agent from North Carolina whose business card Morris managed to secure during her MFA days at Columbia and a writer/husband team team who--pre-book deal--thought to set up a website for Morris that consisted of just an image of a morphine pill on her tongue and you can see why a less conventional approach to publication might have cramped the style of the whole thing: the showcasing of the contemporary druggy underbelly of the former moonshine capital of the world by a stylish, hip young Brooklynite who takes care to control her image and describes said image as "trashy Russian mistress."

I have to admit it's been a genius marketing campaign so far.

The story itself is this:

Nikki Hawkins' mother, presumably while high on Roxies, falls from the wrong side of a waterfall she intended to dive from and dies. (I have no idea why some reviewers are saying she commits suicide; she's laughing and in mid-conversation with her boyfriend when she falls.) The boyfriend grabs 13-year-old Nikki and his bookbag full of pills down at the swimming hole below and they hightail it to his camper, where, mere sentences later, Nikki initiates sex.  Sleeping with Mamma's boyfriend doesn't secure Nikki first-place status when a new redneck girlfriend shows up on the next page, so Nikki steals Wesley's car and his pills and takes off to her daddy's trailer.

Her daddy is Coy Hawkins, the county's top coke dealer, now out of prison after turning rat--his sister Crystal's still doing time. To Nikki's chagrin, Coy Hawkins has quit dealing drugs altogether and is now pimping out Angel, a 15-year-old Nikki used to know at the group home in town. Since Nikki doesn't want to go back to the group home and she also wants to figure out a way of getting money that she believes Coy Hawkins has buried back on the deer run behind the trailer, she knows some adjustments must be made if she is to remain with him.

So Nikki adjusts. Nikki is willing to lure a virgin away from the group home so that Coy Hawkins can make the big bucks off of her (It's even her idea). Nikki uses drugs, participates in armed robbery, and helps dispose of a murder victim's body. Then, when she sees that Coy Hawkins is becoming too strung out and paranoid to handle matters, she takes over the resumed drug trade, one now based on black tar heroin.

It's minimal and sometimes elliptical, and as you can imagine, as dark as a dark holler is likely to get. Supremely effective as a story, but it's hard not to feel that the reader's been some con artist's mark when it's marketed and sold as a novel: Karen Russell's 110-page novella Sleep Donation is only $3.99 as a Kindle single. Or maybe I'm just super sensitive since it's set in Wilkes and there are so few that are: give me more! (Morris has said her next novel's set in New York.)  We're left with a sense that Nikki has mourned her lost childhood, although we've really had only one brief image of a moment that hasn't been brutal or depraved, and that she feels capable of seizing the future. I can't help but find her horribly misguided. The type of man she's dealing with is going to readjust her thinking for her if it takes killing her to do so.

At any rate, here's my favorite section from Young God. I like it because it's a brief interlude from all the sordidness and because the characters are taking a drive that I made every day of my life before I moved away and still make on trips back; I grew up near the "big cemetery," although I've never heard anyone call it that. Poetic license stuff I still feel compelled to quibble over: most of the split-off churches wind up brick, same as their predecessors; Morris has shuffled her landmarks; there are actually two towns cut by the river instead of one; and the gun and ammo shop's still in business. Sue me; even Jesus himself couldn't work miracles in his hometown.

At the other end of the bottom road is the highway. It's a long-looping highway. It's really just a road that's always tar. It leads to town. It takes forever to get there: twenty minutes. The whole time is dropping down but gradually. Nikki hardly feels it.


Very close to town there's the twenty-four-hour Coffee House and the Food Lion and the big cemetery. Otherwise it's trees.


Right now it's dark. The trees fly by as inky fringe. In Nikki's mind there is a certain glittering blackness.


On the north side of town, at the stoplight that turns for the group home, Nikki doesn't breathe. Coy Hawkins gases it as soon as it goes green. Past an empty building where a gun-and pawn used to be he makes a left onto another highway. He heads back into the county. The county is anywhere that's not town. Nikki turns to look at them. Angel's chewing gum.


The highway spits them out to the southeast, into a different county. Nikki clutches the door handle as the pickup merges, rattling, onto an interstate. Tractor-trailers whip by. Headlights spot her eyes. It is six lanes, stick-straight. Nikki stares at everything. Sometimes she flinches. The road signs say CHARLOTTE.