The Odd Testament by Randolph Bridgeman 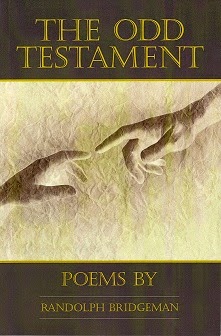 
If you think of poetry as relegated to either Valentine’s Day greeting cards or to literature class textbooks understandable only to literature professors, then you haven’t read a Bridgeman poem.  The Odd Testament is Randolph Bridgeman’s third collection of poetry, and here he continues to deliver poems that are neither sappy nor inaccessible. Bridgeman’s poems are for and about the everyman—around us and in us, whether we acknowledge that everyman or not.

He writes of the people from whom we turn away, superior in the knowledge that we are not like them: the child with OCD, the homeless man living in McDonald’s, the depressed man shooting his ex-lover’s Beanie Babies. And he writes of the people we sometimes become and probably don’t admit to being: the spectator watching one dog hump another, the teen driven to amoral behavior by lust, the  person who loses everything “because this was just one more/thing in a long list of stupid shit/that he’d done.”

Bridgeman’s portrayal of the characters in his poems is frank, and as stripped of pretension as his language. His poems aren’t lengthy; he uses simple, often profane, language; and he limits capitalization and punctuation. Actually, Bridgeman sums up a lot of his own poetry in his poem “poetry readings,” where the narrator states:

Even the poems that are based on the Bible have that unique Bridgeman everyman bent. For example, in the poem “the odd testament,” he takes the stories of Adam, Abraham, Jonah, and Lazarus and gives us a decidedly mortal spin, comparing God to a single parent:

and giving us the innermost thoughts of a surprised and pissed Lazarus who finds himself resurrected “after he’d confessed to/family he’d wronged/been forgiven his debts.” The treatment of the stories of Abraham and Jonah broaches the topic of the divide between father and son that surfaces in later poems such as “a brief conversation with my father about classic greek literature” that ends with “i can’t have an intelligent/conversation with you about/anything he says slamming/the door on his way out.”

Even though Bridgeman’s approach is one of simplicity, most of his poems demonstrate the poet’s command of language. For example, in “lessons,” Bridgeman compares a son who bucks his father’s mold to “that stripped screw he couldn’t back out/that bent nail that cracked his wood/that rounded nut he couldn’t tighten,” and describes the heat of a summer night as “summer’s air slides down/like a tight skirt” in “in the woods.” Not every poem is equally strong. A few are more clever than insightful, proselytize, merely eavesdrop, or simply report on some of the more grotesque attributes of people.

Some poems in the collection are tender, some are funny, some are un-PC, most invite us in and let us know that we are all Adams and Eves in our own way, but damn it, someone loves us anyway. A good many are written in first person. Whether they are confessional only the poet knows, but it doesn’t really matter, for one man’s confession may very well be our own. Which, I think, is the point.

Reading for fun is not really an economic activity. When you sit down with a book, you are not producing anything or buying or selling anything. You aren’t performing a service for anyone other than yourself. You aren’t hiring, supervising, soliciting bids or trading securities. You aren’t harvesting or polishing or packing or drafting or breaking ground or any of the other things people do when they’re participating in economic life. And that’s part of what makes reading so beautiful.

--Max Ehrenfreund, "One reason to look forward to getting older"
at March 18, 2014 No comments: