So, after long last, I'm back, after never meaning to be gone more than a day or two.

I managed to miss my 6th blogiversary by letting the birthday aspect of that weekend in October take precedence; I had to become reacquainted with the judge's manual prior to the Nov. 2 election, then recover after the exhaustion of said election; I had to do much more thising and thating and the othering than usual, for the entire month, and I couldn't think of a thing worth blogging about in all that time.

Plus, I failed so fast at my book buying moratorium that I embarrassed myself there for awhile.

But I got over it. 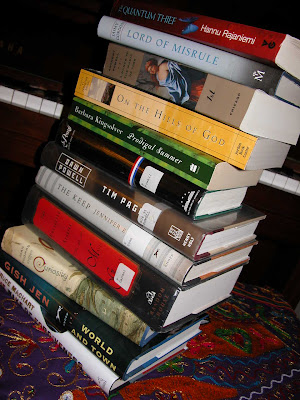 Just a week after swearing off any new purchases, I got a whiff of good news at work, and couldn't resist celebrating by ordering Hannu Rajamiemi's The Quantum Thief. I blame it all on Pat D.

Then, a week later, after another hint of good news at work, I decided to treat myself to Jaimy Gordon's Lord of Misrule and the first movement to Anthony Powell's A Dance to the Music of Time. By the time the package arrived, I'd  come to doubt that dangle of good news ever actually coming to pass and had repented falling off the wagon; I tried to convince my son he wanted to give the books to me for Christmas, but he refused: "I want to get you something special this year." (Once Lord of Misrule won the National Book Award, I taunted him, saying he'd blown his chance.)

And I encountered the Lifetime Reader on Twitter, read her review of Ibrahim Fawal's On the Hills of God, and managed to justify an immediate purchase since it was the first novel from a Palestinian's perspective that I'd ever heard of.

Then there was a used book sale at the university library to raise money for the public library, and I couldn't resist a like-new copy of Barbara Kingsolver's Prodigal Summer; the Library of America's collection of four Dawn Powell novels (My Home is Far Away, The Locusts Have No King, The Wicked Pavilion and The Golden Spur; Tim Page's biography of Dawn Powell; Jennifer Egan's The Keep; and The Collected Stories of Mavis Gallant. 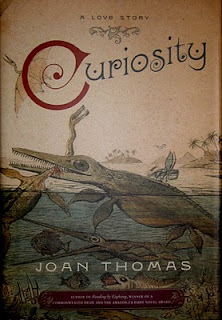 By then I'd gotten over the shame of failure; I could start another moratorium next month. I fell in love with the cover of Joan Thomas' Curiosity, I ordered the book from Canada--a totally compunction-free transaction.

And when we'd successfully found appropriate attire for S.'s induction into the international honor society at his college, I made everyone drop by Border's as my own reward for surviving the, ah, experience of shopping with two males. The store was so dead (a Wednesday night) that I convinced myself that it needed my money more than I did. I came home with Gish Jen's latest, World and Town.

I was lucky enough to win a copy of Bruce Machart's The Wake of Forgiveness from David Abrams. Yay!

So that was my month away from blogging. I did read quite a bit, but that's fodder for another post.
at November 30, 2010 9 comments: