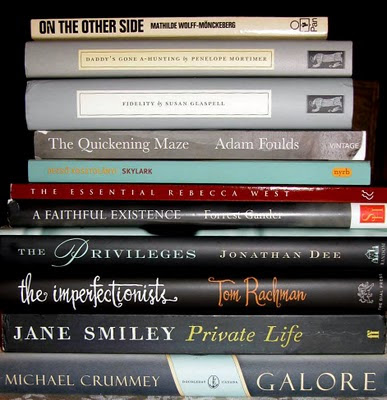 Although I'm not making a lot of progress reading-wise this month, I'm still acquiring books at a steady clip.

Three books influenced by the recent Persephone week and my first ever Persephone catalog: Mathilde Wolff-Munckberg's On the Other Side (in a cheapo used mass paperback edition); Penelope Mortimer's Daddy's Gone A-Hunting; and Susan Glaspell's Fidelity.

Just out in paperback, Adam Foulds' The Quickening Maze.

The Essential Rebecca West. Uncollected prose: seven essays, fifteen book reviews. I think a volume of all of West's uncollected book reviews much more essential than this skimpy offering, but obviously, I'm going to snatch up whatever's out there.

Jonathan Dee's The Privileges. From the new book exchange in the staff lounge.

Tom Rachman's The Imperfectionists. I do believe the buzz, I do, I do.

Jane Smiley's Private Life. I've already read this and I liked it very much.

Michael Crummey's Galore. It's autographed! And I think it won an award, too, but I bought it because it's been highly touted at Book Balloon.

I have decided to vent my spleen by embarking on a series of books that, I hope, will be of no interest whatsoever to the readership of this magazine.

--Nick (He's back!) Hornby, The Believer

Be so glad, constant readers, that I have not been blogging these last many days. I have been in a pissy little mood and I have spared you all the ill effects of that. There have been changes afoot at work--Superdesk-size me!-- and my six-word memoir has not been out of my mind in weeks; let's leave it at that.

So the passive-aggressiveness of reading books no one else would be interested in and blogging about them appeals to me enormously.

If only the people who deserve such treatment read my blog--I'd know just how to handle them.
at May 20, 2010 No comments: 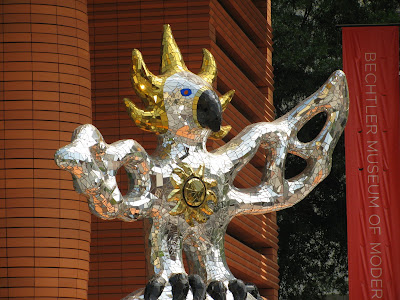 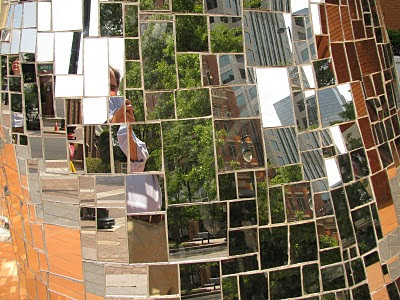 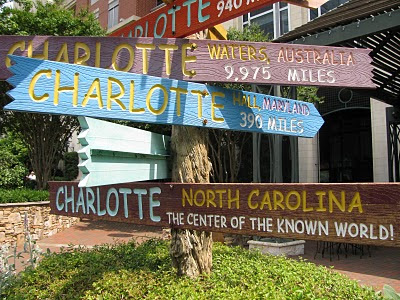 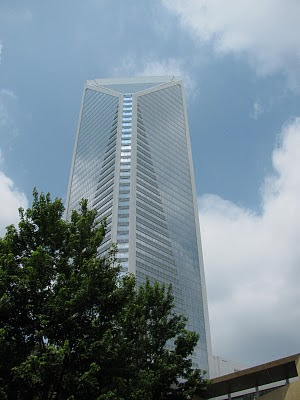 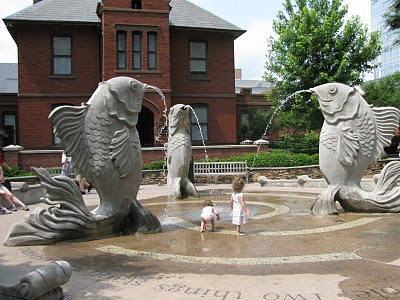 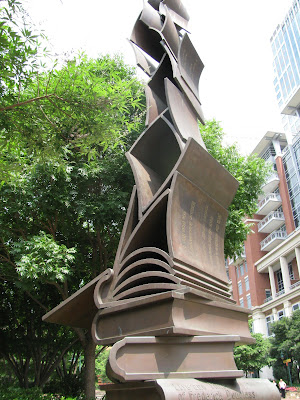 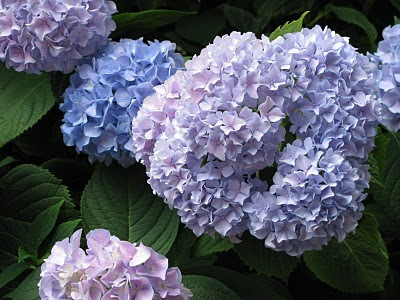 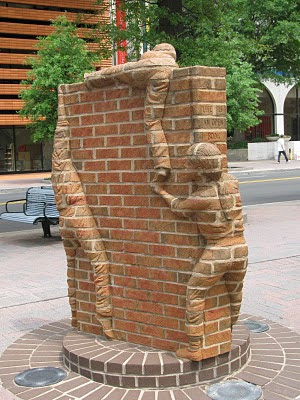 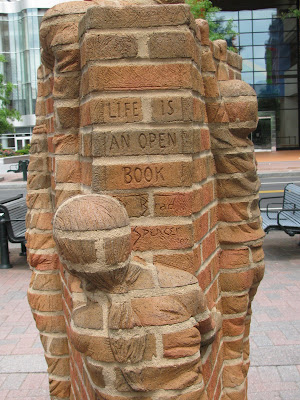 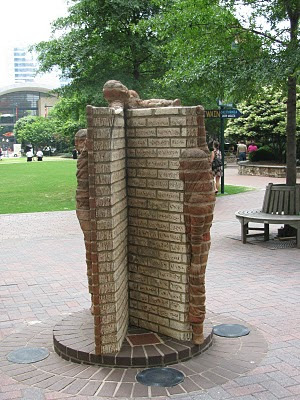 George Gissing's In the Year of Jubilee

It is times like these that I wish you all had e-book readers so that I could implore you to download a freebie copy of George Gissing's In the Year of Jubilee and commence staying up all night to read it. I would love discussion buddies for Jubilee, particularly for the ending, when the natural, organic conclusion we've been traveling toward for our appealing female character (would Gissing's contemporaries have been appalled by an ending we expect as a matter of course?) is replaced (quite abruptly) by Gissing's own misogynistic late-Victorian views. Submit to the patriarchy, ye educated yet still lowly wenches! Biology and the Bible will unite to beat you over the head until you embrace your inescapable inferiority! This, from the author of The Odd Women?

It's as if Gissing undercuts his own artistic creation in order to advance the conventional ideology of his day. Part of what makes In the Year of Jubilee such a fascinating, albeit at times infuriating, read is that current of tension pulsing through its pages. We empathize with the female lead, we see her worth, only to be told, basically, at the end that it's all been a cosmic joke at her (and any woman's) expense--and she'd better acquiesce cheerfully to that fact of life.

"It comes to this. Nature doesn't intend a married woman to be anything but a married woman. In the natural state of things, she must either be the slave of husband and children, or defy her duty. She can have no time to herself, no thoughts for herself. It's a hard saying, but who can doubt that it is Nature's law? I should like to revolt against it, yet I feel revolt to be silly. Once might as well revolt against being born a woman instead of a man."

. . . . "After all, one can put up with a great deal, if you feel you're obeying a law of Nature. Now, I have brains, and I should like to use them; but Nature says that's not so important as bringing up the little child to whom I have given life. One thought that troubles me is, that every generation of women is sacrificed to the generation that follows; and of course that's why women are so inferior to men. But then again, Nature says that women are born only to be sacrificed. I always come round to that. I don't like it, but I am bound to believe it."

Nancy Lord and her brother Horace have been educated beyond the level expected of their lower middle class London suburb; yet their stubborn piano dealer father refuses to move the family to a more refined neighborhood. Horace demonstrates no aptitude for a profession and falls for a vulgar young gold-digger; Nancy expresses social discontent and a mind for independent thought. When he realizes he's dying, Stephen Lord changes his will-- if either marry before the age of 26, they won't inherit a dime.

Unfortunately, Nancy is on holiday with a friend and her friend's mother while the will is being changed. She allows herself to be seduced there by a man of higher social status, a man she's been interested in for some time. To his credit, Lionel Tarrant is technically enough of a gentleman to marry her immediately afterwards, but he's all for keeping the marriage secret and treating Nancy as his mistress--even before they learn the conditions of Nancy's father's will, or that Tarrant's own expected inheritence has vanished, leaving him with nothing. Or that Nancy is pregnant.

Nancy determines to keep both her pregnancy and her marriage secret in order not to lose the money she's sure her father wanted her to have--Horace was the one he expected to marry badly, not her. Lionel ships off to the Bahamas, then to America, more to escape the day-to-day responsibility of caring for a wife and child than to find a financial means of providing for them. Nancy must fend with suitors and her jealous frenemies' threats to expose her fraudulent endeavors; she must find the means of providing for herself and child when her husband proves unreliable. And then Gissing botches the ending with a lecturing love song to inherent masculine superiority. Boo! Hiss!

But until then, what a fascinating look at life at the end of the 19th century--the rise of the middle class, the Queen's 50th Jubilee, lending libraries, educational theory, mass culture, advertising. . . What's the point of reading only material you're going to agree with wholeheartedly, right?