Have You Seen My Trumpet? by Michaël Escoffier 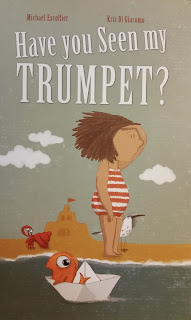 This interactive book consists of a series of questions, the answers to which are found in the final word in the questions. For example, the final word of one question is “dandelion;” the answer to the question is “lion.” Interspersed among the questions is a recurring query from a little girl who is looking for her trumpet. Yes, she does eventually find her (you guessed it) pet. How delightful to read a book that makes words fun! How nice that this title is preceded by two others of the same ilk. A minor complaint is that some of the answers are spelled the same as a part of the final word in the question, but they do not sound the same, which could be confusing to emerging readers. For example, the last word in one of the questions is “fishbowl.” The answer to the question is “owl.” The silver lining is the opportunity for teachers, parents, and caregivers to instruct readers in the wonderful world of the phonetic vagaries of the English language. The illustrators are a feast of earth tones, texture, personality, and humor. In addition, the manner in which Di Giacomo rendered the eyes of the characters enables the reader to know instantly the emotional construct of these characters. As for the humor, what child will not delight in seeing a bat sitting on a toilet?  Note: On the first page, Frisbee is not capitalized. It should be, for it is a trademarked brand name. In addition, a line of text on the final page is missing a comma.
at October 22, 2016 No comments:

Swallow the Leader: A Counting Book by Danna Smith 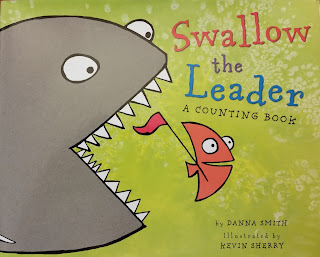 In this amusing spin on the universal childhood game of “Follow the Leader,” one little fish, the leader, leads one, two, three, then ultimately nine other small fish through a winding course in the ocean. Along the way, they follow the leader as it splashes, hides, floats, and imitates other sea creatures. And when the leader instructs the other fish to eat a snack, they follow suit, eventually eating each other one by one. The last fish just happens to be a shark that gleefully swallows fish number nine, which, like the Russian nesting dolls, contains all of the other fish. However, all is not lost, for the shark emits a huge burp, expelling the nine little fish. Told in a singsong rhyme, the tale is part poetry, part marine biology, part addition and subtraction, and part happily ever after. The illustrations of the little fish and shark remind this reviewer of Muppets: bright colors, simple bodies, big mouths, and bulging eyes. The watery environment and its residents of rays, blowfish, turtles, crabs, and a whale have a softer feel—  as if they were created with tissue paper and watercolor. Whatever the method, the book is a visual joy.
at October 22, 2016 No comments: 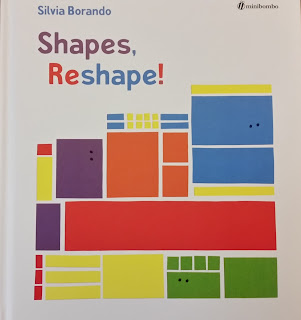 This new spin on a counting book invites children to rely on key words, shapes, and colors to identify different animals. Each two-page spread consists of text on one page and a collection of shapes in different sizes and colors on the other. The text is simple and follows a pattern: The first sentence gives a hint as to what the shapes will make once they are reassembled. Each answer is brief and includes a few alliterative descriptive words to describe each of the eleven different animals featured in the book. The illustrations look like bright pieces of cut paper that are stacked on one page and then reassembled as lions and crabs and hedgehogs and other animals on another. The design choice of lots of white space around the text and illustrations allows the simplicity to shine. Children who enjoy this book will also enjoy Borando’s Shapes at Play. Note: Activities related to this book can be found at http://minibombo.com/en/games-activities/shapes-reshapes.php.
at October 22, 2016 No comments: 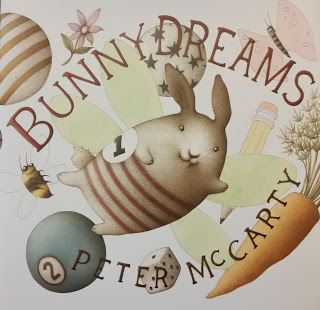 During the day, bunnies know to eat vegetables, stay away from dogs, and seek safety in underground tunnels. During the night, though, it’s another story. In the night, bunnies dream: they dream of flying, of knowing the alphabet and numbers, of writing their names. And when they emerge from their dream state to wakefulness, they gather outside to admire a very special moon. This bedtime story is certainly unique, but what makes the book so charming is the artwork. The bunnies, dogs, and lone chicken (don’t question, just accept) look like elongated balloons with appendages and ears. (They’re so darn cute that this reviewer wishes the publisher would package the book with a plush toy.) This fantasia really takes flight with the dream sequence, for the bunnies are by turns striped and numbered, then clad in form-fitting purple unitards—all the while flying about with lettered wings. This book is by no means conventional; instead, it’s charmingly weird and captures the unmoored imagination found in children.
at October 22, 2016 No comments:

Curious George by H. A. Rey and Margaret Rey 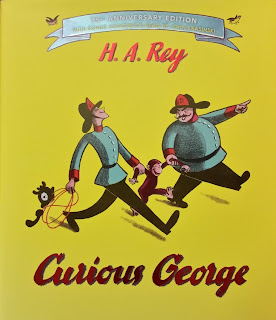 The 75th anniversary re-release of this classic tale is updated to include a free audio download. The story and illustrations are unchanged, and George is as much a stand-in for curious children today as he was when the book was originally published. For those unfamiliar to the story, it’s a tale of a little monkey named George who is captured in Africa by the man with the big yellow hat in order to be delivered to a zoo in an unnamed city overseas. Along the way, George’s curiosity impels him to try to fly, to call the firehouse, and to send him on a skyward journey via balloons. The delightful illustrations capture the personality and energy of George, as well as the colorful chaos and mayhem that he instigates. Although the first book ends with George’s safe delivery to the zoo, his friendship with the man with the big yellow hat is cemented and the two star in six more books by the original author. Actually, that would be authors, for H.A. Rey’s wife, Margaret, is acknowledged to be an equal partner in the creation of all of the original Curious George books. (For more information on their collaboration, see the publisher’s website, http://www.houghtonmifflinbooks.com/features/cgsite/history.shtml#authors). Although the first edition was published under H.A. Rey’s name only, the reason is no longer relevant, so it’s a mystery and a shame that the publisher decided not to credit Margaret in this 75th anniversary publication. The very least the publisher could have done in this anniversary re-release was to  add her biography to that of her husband’s and John Krasinski’s, the narrator for the audio download, on the book’s jacket flap. Note: Resources for teachers and librarians, as well as games and activities for children, can be found at http://www.houghtonmifflinbooks.com/features/cgsite/.
at October 22, 2016 No comments: