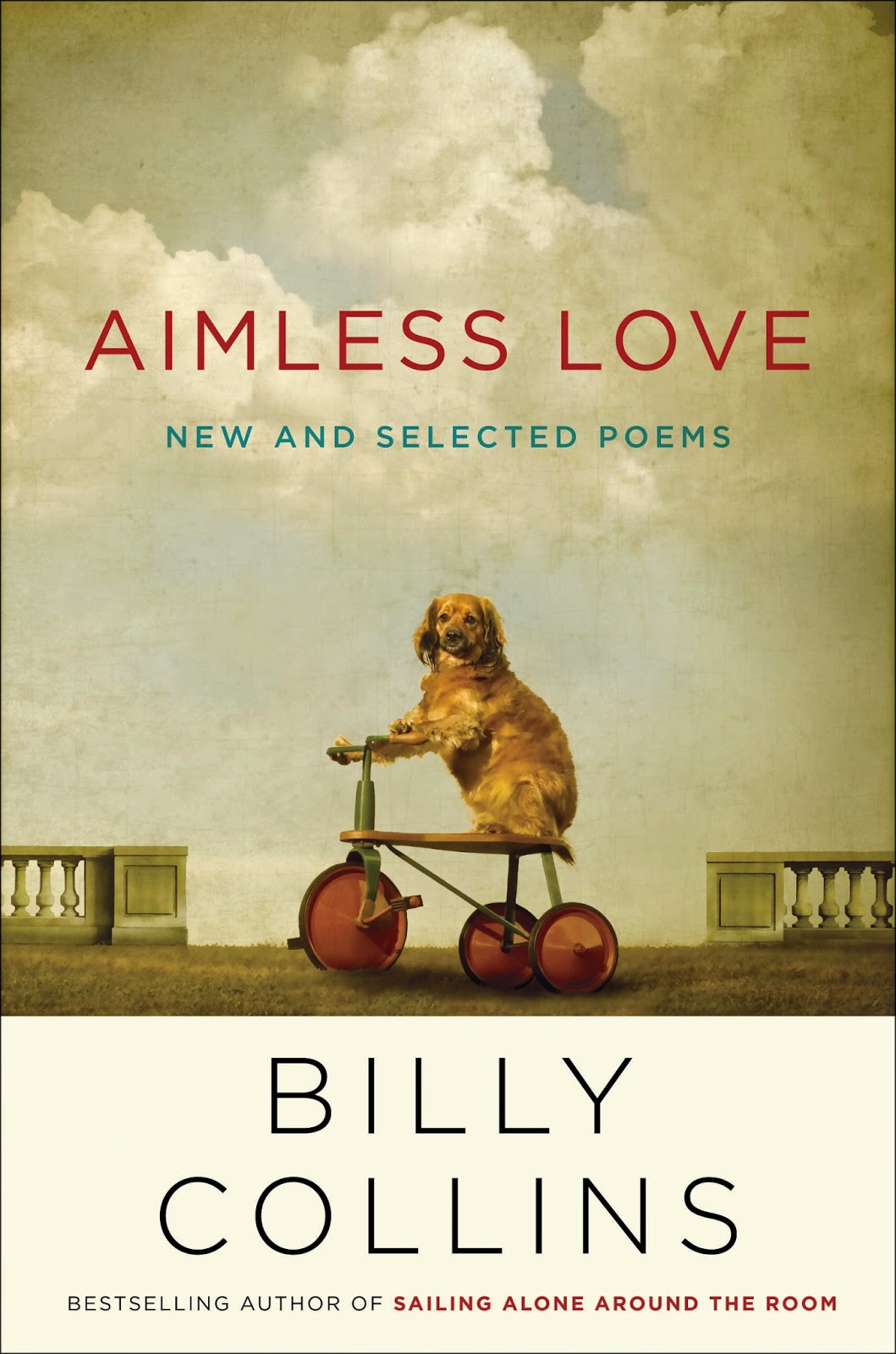 
As most of the poems in Aimless Love: New and Selected Poems were previously published in other collections, which have already been reviewed by others, I will limit the focus of this review to Billy Collins’ fifty-one new poems.
I respect Mr. Collins, integrated his poems in college literature classes I taught, and recently enjoyed listening to a 2002 recording of his guest appearance on NPR’s “Fresh Air.” Listening to his poems (all poems are meant to be read aloud to fully appreciate them) is really the way to go with Collins, and I think I would have enjoyed this book far more if I had listened to it, rather than reading it. If you’re unfamiliar with Collins, treat yourself to a few minutes of listening to him read his poetry by searching YouTube or watching his “Everyday Moments, Caught in Time” at http://www.ted.com/talks/billy_collins_everyday_moments_caught_in_time#
Collins’ new poems are likeable. But most are rather light, like snacks: a pleasure to eat at the time, but not terribly filling. Where the poet shines is in his humorous poems that go beyond just the wit or the laugh to say something broader and deeper. My favorite (and one he reads on the TED Talk) is “To My Favorite 17-Year-Old High School Girl.” Here he compares a typical American teen to Judy Garland, Joan of Arc, Franz Schubert, and others who were quite accomplished at a relatively young age. Collins ends the poem as follows:

Frankly, who cares if Annie Oakley was a crack shot at 15
or if Maria Callas debuted as Tosca at 17?

We think you are special by just being you,
playing with your food and staring into space.
By the way, I lied about Schubert doing the dishes,
but that doesn’t mean he never helped out around the house.

And here it is written as prose: “I would rather eat at the bar, but such behavior is regarded
by professionals as a form of denial, so here I am seated alone at a table with a white tablecloth
attended by an elderly waiter with no name—ideal conditions for dining alone according to the connoisseurs of this minor talent.”

It’s not just that the former poem rhymes and the latter doesn’t (for poems don’t have to rhyme, of course), it’s that there are so many elements—the rhythm purposefully matching that of a waltz, the hyperbole of whiskey strong enough to make one dizzy, the comparison of the boy clinging to his father’s shirt to that of death’s grip—that “My Papa’s Waltz” must take form as a poem. “Dining Alone” does not. A poem such as this makes me wonder if it had been submitted to a publisher under the name of an unknown instead of by Collins, would it have been published?
The collection also includes poems that are nostalgic in tone or cover the subject of aging, which makes sense for a man now in his seventies. The collection, though, ends on a heavy note, “The Names,” a poem written for 9/11 victims. In addition to it being out of step with the tone of the preponderance of the new poems, it was written in 2002, so it’s unclear why it appears in the “New Poems” section.
As a poet myself, though, I certainly appreciate this “people’s poet,” not only for his ability to make poetry accessible and likeable, but his ability to actually make a living writing poems.  Collins certainly makes one’s first foray into poetry an easy one, which opens the door for readers to explore other poems and poets. And that’s a good thing.
at July 14, 2014 No comments: