Thoughts on The Vet's Daughter by Barbara Comyns

"She can't do that, can she?" I asked myself when I reached the last page of Barbara Comyns' 1959 novel The Vet's Daughter. "She can't have a first person past tense narration and then kill off the narrator on the last page! I mean, obviously, she can, but isn't it stooping kind of low?"

Then I looked back a few pages, spotted a one-sentence flashforward whose significance I'd failed to note previously, and all was forgiven. I love dead narrators. Alice Rowland has been playing this card--that she's talking to us from beyond the grave--close to the vest.

Many things are played close to the vest in The Vet's Daughter, leaving the reader at the end not quite sure how we're supposed to interpret certain events, or even certain characters. For example, the novel opens with a description of a "man with small eyes and a ginger moustache" who walks along the street with Alice while she "was thinking of something else. . . . He told me his wife belonged to the Plymouth Brethren, and I said I was sorry because that is what he seemed to need me to say and I saw he was a poor broken-down sort of creature. If he had been a horse, he would have most likely worn knee-caps." This man is not seen or mentioned again until the final pages of the book. Clearly Comyns intends the ginger man to serve more purpose than arouse Alice's pity--but what? I can't worry it out.

But I'm getting ahead of myself. This is the story of Alice Rowland, 17-year-old daughter of an abusive London veterinarian who is more apt to send an unwanted puppy to the vivisectionist for a pound than to put it down humanely as he is supposed to. He's broken Alice's mother's front teeth with a kick in the face, and even worse, her spirit. He mostly ignores Alice since she disappointed him by being born a girl, but she's still frightened of him. Their house is grotesque--dark, smelly, decorated with the rug of a Great Dane's skin and a monkey's jaw, filled with animals in cages that Alice is required to take care of.

One night shortly before Alice's mother, who is dying of cancer, is euthanized against her will by Alice's father, Alice listens to her mother reminisce once again of growing up  on a farm in the mountains of Wales: "Dark brown moss grew in the mere by the farm; and once I saw a little child floating on the surface. She was dead, but I wasn't afraid because she looked so pure floating there, with her eyes open and her blue pinafore gently moving. It was Flora, a little girl who had been missing for three days. . . "

The morning that Alice is told her mother has died, she sees a Jacob's ladder that the sun has made across the floor of her mother's bedroom.

After the funeral, Alice's father goes missing for three weeks. He returns with a barmaid --the strumpet from the Trumpet-- Rosa Fisher (a fisher of men?), who he euphemistically tells Alice will be their housekeeper. Rosa quickly assumes an evil stepmother-like role in Alice's life. One afternoon while fixing their lunch in a steamy hot kitchen Alice imagines--or so she thinks at first--that she is floating above water in the mountains. "This wonderful water world didn't last long because a mist came, and gradually it wasn't there, and something was hurting my head. Somehow I'd managed to fall on the kitchen floor, and knocked my head on a coal scuttle. Coal had got in my hair, but otherwise everything was as it had been before I'd seen the water garden--just boiling beef and steam, and heard Rosa's and Father's voices coming through the wall."

Alice hasn't realized it, but her mother's reflections and death have inspired her to begin levitating. For most of the book, I was prone to read these instances metaphorically, as they happen after times of great psychological distress for Alice. Yet Comyns has Alice read ghost stories and Alice mentions how happy her mother's ghost must be when she leaves home to be a companion on an island for Henry Peebles' mother (Peebles is a kind man who cares for Alice, although she does not particularly want to marry him).  There's no denying that there's something supernatural going on here, especially once you accept the story's being told from beyond the grave.

And after Alice's father decides to exploit her talent, once she has returned home following Mrs. Peebles' suicide, to have her "rise up before all the people on the Common" it becomes clear that Comyns is turning Alice into a Christ figure, parodying the Christ story, since, as a character explains, the beauty in Alice's case is she isn't religious: Alice is given wine to drink and thinks it must be blood; she smells sour bread and cockroaches; she is kept prisoner; she exclaims, "Please God, don't let that happen to me. Father don't make me do this thing. I don't want to be peculiar and different. I want to be an ordinary person. I'll marry Henry Peebles and go away and you needn't see me any more--but don't make me do this terrible thing."

Alice's ordeal is not removed. Alice, in despair and humiliation, is brought in a bride's white dress, in a hearse-like carriage, to rise up and then come "down amongst the people." Trampled by a frightened crowd milling about in circles, she dies. Unlike the man with the ginger mustache, who dies with a terrified expression on his face, at the moment Alice's life is finished, she states, "[F]or the first time in my life I was not afraid."

And now I'm left with the thought: is the man with the small eyes and the ginger mustache a stand-in for the reader? A small-eyed someone Comyns and her characters briefly walk beside while thinking of something else? 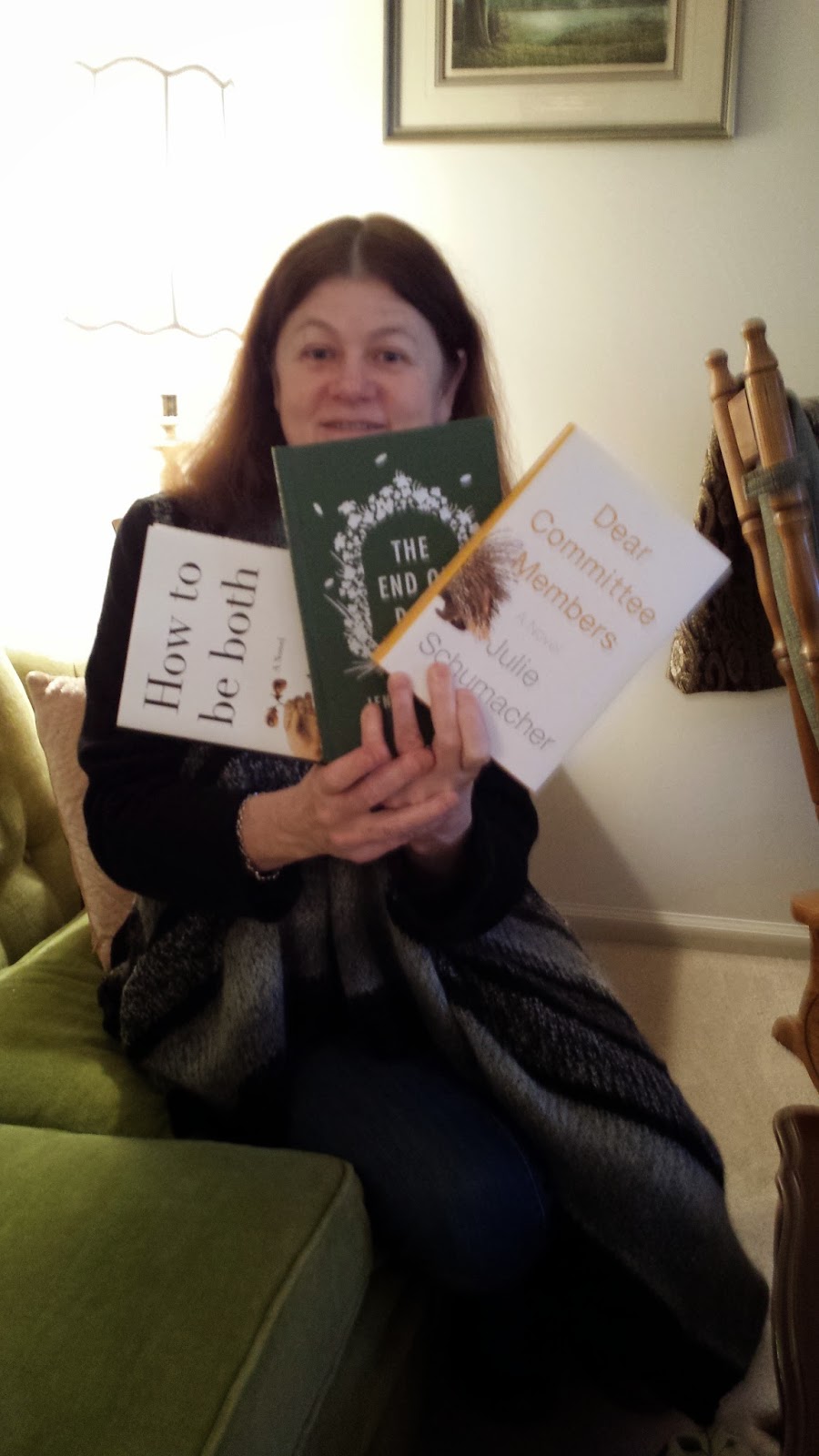 I am horrified to look back and discover that last January I didn't even manage to recycle my usual Eschew the New! resolution, that my first post of the year (and sparse they were) didn't come until February 1. I am extremely grateful that Wendy was willing to share her thoughts on books over the course of 2014 and hope she will continue to do so forever and ever. I just need to get my groove back, so prepare for a lot of inane posts while I redevelop the blogging muscle, all right? Mixed metaphors will abound!

I finished the Fill in the Gaps Project very quietly in April. A five-year plan, the objective had been to read 100 books, but we were to count ourselves successful if we read 75. I read 86, then completed another six from the list by the end of 2014. Over the course of the project, I realized I liked long-term projects with large pools of books.

And that brings me to my new project, one I'm calling 60 by 60, although I certainly hope I manage to read more than 60 books on the list. It's heavy on the classics--Gissing, Trollope, Stendhal--and other authors I really ought to have read, or read in more depth, by now.

So that's the five year plan. Perhaps I can get a head start on it, since between today and April 1, I'm participating in James' TBR Double Dog Dare.  (I am so glad James didn't retire the dare!) I have a book on back order and of course I will buy the new Anne Tyler the moment it comes available in February, but other than that, I can think of no books that will break my determination to read from the books I already have stockpiled here and on my desk at the library. Of course, one reason my will seems so strong is that I have ten books from the Tournament of Books long list either on hand or on hold!