"I don't believe in ghosts, but I see them all the time."

Sherman Alexie cancels book tour for memoir about his mother.
at July 15, 2017 No comments: 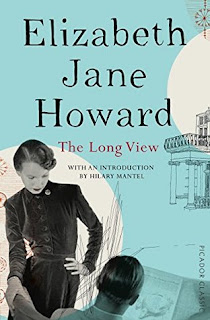 She had never felt so vulgar in her life.

Later, he said: 'I doesn't make you happy, though, does it?'

'It doesn't make me anything.' Then she added with a rush: 'I'm sorry. I don't feel real. Everything seems a long way ahead or a long way behind, and I seem in the very middle of a vast vacuous interim. Do you understand that?'

He shook his head. 'Never mind. What do you do in London?'

'I just wondered what you did.'

She took a deep breath. 'I run one house in London and another in the country.'

There was a pause while she waited for him to say something about Kent; but he said nothing, and she continued faster and more defensively: 'I look after my children. Julian's at his prep school and Deirdre goes to a day school near London. I--'

'So they are away or out all day,' he interrupted.

'Yes. That's what all childen do at that age. Many children,' she corrected herself--obviously he had not done it. 'Then we entertain a good deal. Conrad likes streams of people.'

'So you have a lot of cooking.'

'I don't do the cooking. I couldn't possibly cook well enough for Conrad. I do the arranging of it. There is a lot of arranging, you  know. I read, and look at pictures, and garden, and listen to music - and Conrad minds awfully about clothes so I spend a certain amount of time on them--' She stopped: she knew dimly how it all sounded to him and knew dimly what it was all like - equally and differently unsatisfactory and incomprehensible to them both, and her talking only made it more irreconcilable.

'I suppose I'm a sort of scene shifter for Conrad,' she finished. 'He likes an elaborate setting, and he likes it to vary. I try to do that for him.'

'I'm sure you're very good at whatever you try to do,' he said; and they surveyed one another worlds apart across the small table. Anyway, I can leave him, she thought; it will not be difficult at all, and years hence it will simply be a surprising and friendly thing to remember. We have nothing in common, she thought, and if we go on now, I shall be back before the children are asleep.