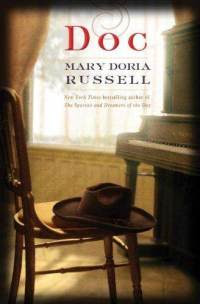 Oh sure, I'd heard of Doc Holliday, Wyatt Earp, the shoot-out at the OK Corral, and Tombstone, Arizona before reading Doc by Mary Doria Russell, but they were names and places that held no substance, like placeholders at a dinner party, not the guests themselves. Russell's gift in this work of historical fiction is a well-told story tethered in fact, but allowed to graze.

Rooted in what facts the author could unearth (she writes of her source material in the notes at the end of the book), the novel takes us on the detailed journey of Dr. John Henry (Doc) Holliday whose fate rests not with Russell, but with history. What makes Doc so engaging is Russell's portrayal not of "[A] cold and casual killer," as he was caricatured by the newspapermen of his day, but of a man who is at the mercy of tuberculosis; a man who is an accomplished pianist, dentist, and card shark; a man in love with a whore; a man who is by turns gracious and enraged; and a man whose relationship with the Earp brothers is not so infamous as what legend would have us believe.

Doc is cleverly divided into chapters using poker terms--poker and a game called faro are integral to the story. And just like in cards, the author lays out her cast of characters in a section called "The Players," where she differentiates the fictional ones by putting their names in italics. This section is a particularly helpful resource.

My only complaint is the novel leaves off in April, 1879, just as Doc is about to leave Dodge City, with the final chapter focusing on Kate, Doc's lover, and summarizing the rest of the main characters' lives. I only hope Russell considers expanding that short narrative into a full-fledged follow-up novel. Please, Mary, play one more hand.
at July 17, 2011