Reading update, a rather rambling one at that

Reading-wise, I probably have too many irons in the fire right now. I'm three letters into the alphabet in Insectopedia; four chapters into Nixonland; one  essay away from the book reviews in The Essential Rebecca West; one act completed in my reread of Othello; random scant stories into Binocular Vision. I've kept Choices in my In Progress widget as penance despite not picking it up since early December (people who tried this after I raved about Mary Lee Settle: oh, this one is not. at. all. like the Settles I've loved). I need to start rereading Atonement for library staff book club. I need to start Safe from the Neighbors just because I want to. I need to stop being afraid of The Waves and float luxuriously upon its waters like W., my poet friend and fellow Woolf reader, instead of remaining stiffly upright (so who's the counterpart to Forster? who's supposed to be Vanessa?), afraid of going out too far.

David imagines himself with octopus arms, but I wish I were an insect with multi-faceted eyes to take in all these books at once.

He Knew He Was Right is now my favorite Trollope. L. and I have had a running joke throughout the years--that the underhanded minister tricked a promise to obey out of me during our wedding ceremony--that I thought about quite often over the week I spent racing through this novel.  I don't do obedience. If L. suggests we attempt to stick for a length of time to what he terms an "austerity budget" to achieve some financial goal, I'll concur. If he says DON'T you spend any money you don't have to, I'll come home with a bronze statue of John by-god Wayne or a sleigh bed sticking out of the back of the car and say DON'T you even ask what this cost. And he doesn't. Marriage means recognizing when you'd better back off and think of a better way to word your requests. 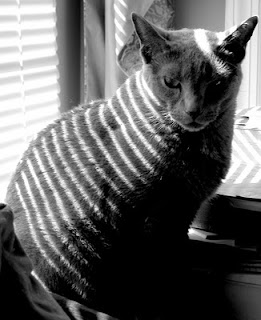 But what  if there's no give and take, what if the obedience demanded of you also includes swearing that a base falsehood told about you is absolutely true? Would it have been possible for Emily to endure, let alone achieve contentedness in, a marriage to such a paranoid individual as Louis? Our cat Claudius suffers from paranoia* and while we all tolerate and make concessions for the delusions that dictate his behavior, we know his default settings aren't right and no one--human or cat--is willing to fall in line with his way of thinking.

Anyway, I'm rereading Othello, mentioned several times in the Trollope, since I haven't read it since high school and I'm trying to read as organically as I can this year.

Because the dovetailing in the books I've read so far in 2011 has been glorious, although none of it was planned. The Alan Turing and cryptoanalysis of WWII in the Connie Willises reappear in Scarlett Thomas's PopCo; the destruction of the London department stores during the Blitz, first encountered fictionally in Willis, happens in real life in a Rebecca West essay. A saying used to illustrate chaos theory late in the Willis shows up again as the epigraph to Started Early, Took My Dog. Plato's Symposium influences Virginia Woolf's The Waves.

And so it will go, if I'm lucky, through the rest of the year's reading.

*including the misguided notion that he might be safer disguised as a zebra
at February 06, 2011