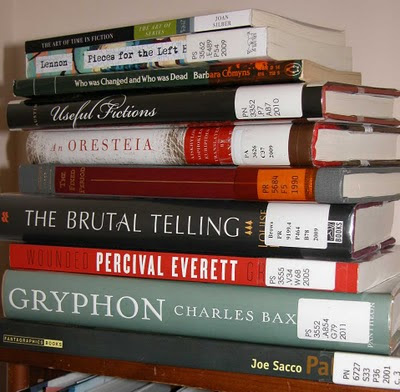 Well, maybe not, but I ought to!

Last year there were a lot of changes at the university library including a new book distributor, one that provides us with books that come shelf-ready. Between the budget crisis from the previous year and a focus on filling the faculty's needs, there were long months on end with slim literary pickings on the new books shelves for the likes of me.

Things are much improved now; while there are quite a few worthy books from last year that the library still doesn't have, spotting Charles Baxter, Gryphon, on the shelf last week--just out last month--gives me hope that the lag between publication and purchase isn't to be as great as it's been in the past.

Coming home with me Friday afternoon were:

Joan Silber's The Art of Time in Fiction. Baxter is series editor for the Art of collection, and I thoroughly enjoyed his own contribution, The Art of Subtext, back in 2007.

Barbara Comyns's Who was Changed and Who was Dead. I read Our Spoons Came from Woolworths years back, so I know what a treat this will be. The first sentence: "The ducks swam through the drawing-room windows."

Michael Austin's Useful Fictions: Evolution, Anxiety, and the Origins of Literature. According to the flap, a useful fiction is "a simple narrative that serves an adaptive function unrelated to its factual one."

Anne Carson's An Oresteia. I'm going to listen to all of you and read The Orestia first, but I wanted it on hand nonetheless.

Louise Penny's The Brutal Telling. C. has been raving about the follow-up to this mystery, Bury Your Dead, which she wants to Kindle-loan to me. But the reviews at Amazon lead me to believe I ought to read this one first.

Percival Everett's Wounded. It's about a horse-trainer in Wyoming and it's been compared to Cormac McCarthy and Walker Van Tilburg Clark. This just might be my choice for C.B.'s western challenge in the spring.

Joe Sacco's Palestine. A landmark work of comics journalism, according to the cover blurb.

Tomorrow: the books I've bought since the first of the year.
at February 13, 2011