The Classics Circuit: Trollope's The Way We Live Now

The Way We Live Now, a satirical attack on the "commercial profligacy"of early 1870s England , is regarded as one of Anthony Trollope's finest novels, if not his masterpiece. In the summer of 2009, Newsweek put it at the top of its list of works that "open a window on the times we live in," explaining "[t]he title says it all. Trollope's satire of financial (and moral) crisis in Victorian England even has a Madoff-before-Madoff, a tragic swindler named Augustus Melmotte."

The audience of Trollope's day was less appreciative of its portrayal. Reviewers took issue with and resented the title itself; they argued that Trollope had not created a novel that was an honest characterization of their world. According to Marion Dodd, who wrote the introduction the 1950 edition, Trollope had peaked in the 1860s: "Mercenary marriages, abuse of the wealthy and their ill-gotten gains, satirical treatment of the nobility bereft of money, morals, and stamina, were so different from the material in Trollope's other books that the result was first shock, and then indifference and weariness." 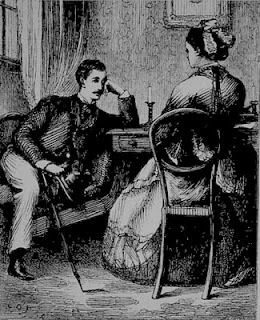 Trollope had intended to focus the novel on Lady Matilda Carbury, his notes show:

Living in Welbeck with son and daughter, spoiling the son and helping to pay his debts -- clever and impetuous. Thoroughly unprincipled from want of knowledge of honesty -- an authoress, very handsome, 43 --trying all schemes with editors, etc. to get puffed. Infinitely energetic --bad to her daughter from want of sympathy. Flirts as a matter of taste, but never goes wrong. Capable of great sacrifice for her son. The chief character.

The book opens with Lady Carbury dashing off letters to the editors of the London papers with the intention of securing the necessary reviews for her just-published Criminal Queens, a book in which she's spread "all she knew very thin, so that it might cover a vast surface. She had no ambition to write a good book but was painfully anxious to write book that the critics should say was good." Lady Carbury, the narrator tells us, "was false from head to foot, but there was much of good in her, false though she was."

Lady Carbury's greatest desire is to marry her handsome son off to an heiress. Sir Felix Carbury at 25 has already run through all the money left him by his late father and has no compunction against demanding and wasting the little that his mother and sister have to live on keeping horses in the country and gambling at the Beargarden, the club where all the young wastrels spend their time passing IOUs back and forth (living within one's means is not the way anyone lives now).  Mother and son set their sights on Miss Marie Melmotte, only daughter of financier Augustus Melmotte, recently established in London and growing in prominence among the upper-crust despite a cloud of rumors.

It was at any rate an established fact that Mr Melmotte had made his wealth in France. He no doubt had had enormous dealing in other countries, as to which stories were told which must surely have been exaggerated. It was said that he had made a railway across Russia, that he provisioned the Southern army in the American civil war, that he had supplied Austria with arms, and had at one time bought up all the iron in England. He could make or mar any company by buying or selling stock, and could make money dear or cheap as he pleased. All this was said of him in his praise, -- but it was also said that he was regarded in Paris as the most gigantic swindler that had ever lived; that he had made that city too hot to hold him; that he had endeavoured to establish himself in Vienna, but had been warned away by the police; and that he had at length found that British freedom would alone allow him to enjoy, without persecution, the fruits of his industry." 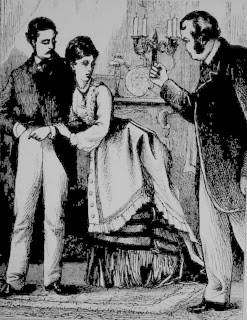 Melmotte desires that his daughter marry well, in the upper rungs of society; Lord Nidderdale is willing "to take the girl and make her Marchioness in the process of time for half a million down." While the men are arguing terms, Marie, who's been developing a mind and opinions of her own, falls for the undeserving Felix, who at least is paying attention to her.

Melmotte refuses to consent to the match, telling his daughter that Felix is destitute and wants her only for her money. Undeterred, realizing that all men want her for is her money, Marie contrives to elope to New York with Felix, stealing money from her father and giving it to Felix to finance the trip. Felix, however, fearing that Melmotte will cut them off without a penny despite Marie's assurances that she has a fortune already signed over in her name, is too much of a coward to meet Marie in Liverpool as they've planned. He instead loses the money given to him gambling at the Beargarden while Marie is prevented from getting on the ship by men her father has sent to bring her back. Much to Lady Carbury's dismay, Felix gives up on the schemes to marry Marie.  Melmotte and Lord Nidderdale, however, continue their negotiations for a mutually beneficial marriage; Marie is but chattel to them and nothing she says or does really signifies.

There are several other affairs of the heart that thread through The Way We Live Now--Felix's sister Hetta is loved by both her much-older cousin Squire Roger Carbury, who Lady Carbury wishes her to marry, although not because he's the most moral man around, and Roger's close friend Paul Montague, who Lady Carbury disdains. Hetta loves Paul, but more difficulties arise when Paul's former fiance, the American Mrs. Hurtle, follows him to London and demands he keep his promises to her. Ruby Ruggles, whose farmer grandfather is one of Roger's tenants in Suffolk, doesn't want to marry the slow-witted but loving John Crumb, who's always covered in meal, when Sir Felix Carbury is willing to see her on the sly, especially when she runs off to London to stay with her aunt. And Georgiana Longestaffe, whose father can no longer maintain a lavish lifestyle, is so desperate that she condescends to engage herself to an elderly Jewish banker (anti-Semitism abounds in TWWLN, unfortunately). But the engine at the center of the novel is definitely Melmotte's maneuverings through the artistocratic society that doesn't approve of his kind yet cannot resist associating with him due to his incredible ostentation and power. And, of course, his shady investments and financial skulduggery--buying property without paying a dime to the too-afraid-ask-for-it Longestaffe, for example--keep the reader attentive. Melmotte chairs the London board of directors for the Great South Central Pacific and Mexican Railway, a railway proposed to run from Salt Lake City down to the port of Vera Cruz. There are no plans to actually build the railway; it is just a reason to float a company and engage in stock speculation.

Melmotte entertains the Emperor of China and  is elected a conservative member to Parliament before it becomes impossible for society to continue to condone his fraudulence.  Those who'd attached themselves to him earlier begin to break away and Melmotte is left alone -- his wife and daughter don't count -- to face a fast approaching arrest. Trollope provides a psychologically gripping portrayal of Melmotte's attempts to bully and bluff his way through, including a scene where he mortifies himself after showing up drunk in the House of Parliament. 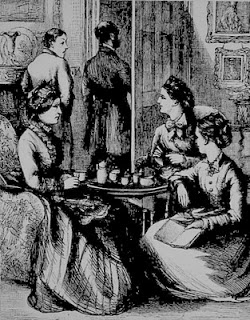 What I found most disturbing in Trollope's depiction of Victorian England is its routine disregard for and mistreatment of women:

Henrietta had been taught by the conduct of both father and mother that every vice might be forgiven in a man and in a son, though every virtue was expected from a woman, and especially from a daughter. The lesson had come to her so early in life that she had learned it without the feeling of any grievance. She lamented her brother's evil conduct as it affected him, but she pardoned it altogether as if affected herself. That all her interests in life should be made subservient to him was natural to her; and when she found that her little comforts were discontinued, and her moderate expenses curtailed because he, having eaten up all that was his own, was now eating up also all that was his mother's, she never complained. Henrietta had been taught to think that men in that rank of life in which she had been born always did eat up everything.

A daughter or wife who refused to accept this natural order, or was unlucky in who her care depended, could expect and did receive violent treatment. Lady Carbury's backstory contains a history of physical abuse which she as a matter of course attempted to hide from the world; she bore the brunt of the scandal when she separated from him for awhile. Likewise, the independence of the American Mrs. Hurtle, who dared pull a gun on her ex-husband to keep him from sexually assaulting her, is presented as the grounds that justify Paul Montague's preference for the meek and innocent Hetta Carbury: Mrs. Hurtle is "a wild-cat" and just won't do in polite society.

Marie Melmotte is horribly beaten by her father during the course of TWWLN and accepts such treatment: Melmotte had certainly been often cruel to her, but he had also been very indulgent. And as she had never been specially grateful for the one, so neither had she ever specially resented the other. . . she. . .had come to regard the unevenness of her life, facillating between knocks and knick-knacks, with a blow one day and a jewel the next, as the condition of things which was natural to her.

Beaten by her grandfather, Ruby Ruggles is on the verge of being raped by Felix Carbury when John Crumb shows up to save her. Small wonder Mrs. Hurtle and Ruby's aunt do their best to ensure Ruby marries John despite her belief that the man is beneath her: he'll keep her well-fed and won't beat her. Isn't that all a Victorian woman could want?

After making it almost 50 years without reading anything by Trollope, I read my first, The Warden, in the spring of 2009 and quickly realized the error of my previous ways. Since then I've read The Vicar of Bullhampton, The Bertrams, The Claverings, Can You Forgive Her?, The Macdermots of Ballycloran, making The Way We Live Now my seventh Trollope.

It certainly won't be my last.

This post is part of the Classic Circuit's Trollope Tour. Dwight at A Common Reader is currently blogging his progress through The Way We Live Now; his posts are most recommended.
at December 13, 2010