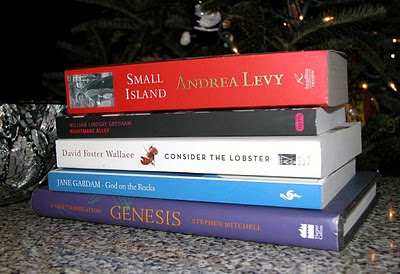 Truth be told, I didn't get any books for Christmas--just a single gift certificate to Barnes and Noble, which has already been spent, on a Chatham County Line cd and Bruce Duffy's The World as I Found It (not pictured).

Oh, but the Andrea Levy on the top of the stack which I ordered back in November didn't make an appearance in the mailbox until Christmas eve afternoon when I was frantically wrapping gifts, so its festive-red self wound up in a box with a pair of socks under the tree somehow, but didn't actually count.

God on the Rocks. Jane Gardam

Since the photo op, I've also received Marcel Proust's Days of Reading and Charles Portis's first novel Norwood. I've pre-ordered Karen Russell's Swamplandia!, due out in February, and I'm going to do my level best not to order any more books between now and then. No, really!

I'm shoehorning everything in here at the blog at the last--I've got a couple more posts, including my yearly reading stats and my favorites, that I'll be working on between now and bed tonight--but right now I need to go take more cold medicine and determine if there's any way we can get the downstairs cleaned up in time for my son's birthday-eve party tonight (do all January 1sters wind up celebrating the night before?).