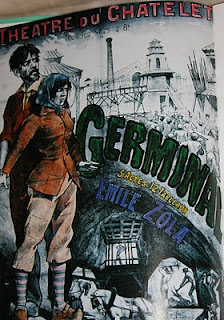 His rage was terrifying. Never had he spoken so vehemently. With one arm he supported old Bonnemort, displaying him like a flag of misery and grief, crying for vengeance. In rapid phrases he went back to the first of the Maheus, and told of the whole of this family done to death in the pit, victimized by the Company, hungrier than ever after a hundred years of toil; and then by contrast he pictured the bellies of the directors sweating money, the great crowd of shareholders kept like whores for a century, doing nothing, just enjoying their bodies. Wasn't it terrible to think of? A whole race of people dying down in the pits, sons after their fathers, so that bribes could be given to Ministers and generations of noble lords and bourgeois could give grand parties or sit and grow fat by their own firesides! He had studied miners' occupational diseases and now brought them all out with horrible details: anaemia, scrofula, black bronchitis, choking asthma, paralysing rheumatism. They, poor devils, were just machine-fodder, they were penned like cattle in housing estates, the big Companies were gradually dominating their whole lives, regulating slavery, threatening to enlist all the nation's workers, millions of hands to increase the wealth of a thousand idlers. But the ignorant miner, the mere brute buried in the bowels of the earth, was a thing of the past. In the depths of the mine an army was springing up, a harvest of citizens germinating like seeds that would break through the earth one sunny day. And then they would know whether, after forty years' service, they could dare to offer a hundred and fifty francs as a pension to an old man of sixty, spitting coal and with legs swollen with the water of the coal-face. Yes, labour would call capital to account, capital, that impersonal god, unknown to the worker, crouching somewhere in his mysterious tabernacle whence he sucked the blood of the poor starving devils he lived on! They would go and hunt him out, and make him show his face in the glare of fire, they would drown him in blood, this disgusting hog, this monstrous idol gorged with human flesh!

Long regarded a masterpiece of French naturalism, Emile Zola's Germinal introduces us to the inhabitants of a company mining town in northern France during the mid-1800s. Conditions are brutal within the coal  mine and not much better at the surface--mothers routinely sell themselves and their young daughters sexually in order to put a meager amount of food on the table. Debt, deprivation and depravity are the natural order and no one has any expectations that things could be otherwise than worse.

Then a stranger, Etienne, comes to town. He convinces the miners to begin a provident fund which later, when the mining company cuts the already bare-bones wages, will enable the miners--for a time--to make an attempt to better their lives by going out on strike.

Zola takes us into the lives and perspective of the capitalists as well, who have their own limitations and problems: 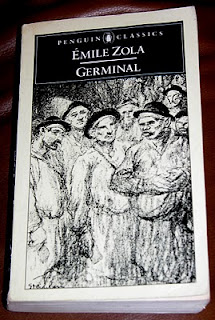 He had food in plenty, but that did not prevent his groaning in anguish. His devastated home and the long drawn-out pain of his life--these things seemed to rise and catch him in the throat like the gasp of a dying man. As though everything in the garden were lovely just because you had bread to eat! What idiot imagined that happiness in this world depended on a share-out of wealth? These starry-eyed revolutionaries could demolish society and build a brave new world if they liked, but they would not by so doing add one single joy to man's lot, nor relieve him of a single pain merely by sharing out the cake. In fact they would only spread out the unhappiness of the world, and some day they would make the very dogs howl with despair by removing them from the simple satisfaction of their instincts and raising them to the unsatisfied yearnings of passion. No, the only good was to be found in non-existence, or if one had to exist, in being a tree, a stone, or lower still, a grain of sand, for that cannot bleed uder the heel of every passer-by.

I'd had it in the back of my mind to read Zola for many years, Germinal in particular since 2006, so I'm most appreciative of The Classics Circuit's Zola tour serving as motivation to actually follow through in doing so. This was a tough read in that there was so much unrelenting misery in the miners' lives, and there were times when I would have appreciated a bit of authorial pulling back instead of a full-throttle assault on my emotions: yes, I'm talking about Poland the rabbit and the pit ponies. Eep. My imagination would have been sufficient in supplying the details without any help on Zola's part.

I read the Leonard Tancock edition and would recommend it.
at April 08, 2010