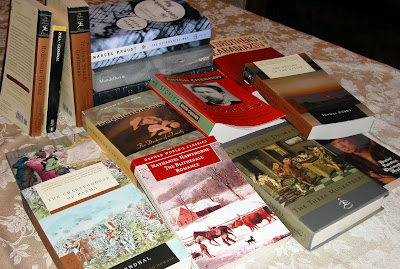 As I've said before, 2006 was a good year for reading. My favorites--and I'm calling a book a favorite if I finished it convinced that I'd like to read it again someday--are as follows:

What do I intend to read next year? I'm going to qualify my "Read at Whim!" mantra with a "From the Books I Already Own" tag. I'm going to do my level best to ignore the new book cart at the university library and to keep my holds at the public to a minimum. I want to read the hardbacks already purchased before stockpiling any more. Well, many more.

I've tweaked the list of thirteen classics to read in 2007 that I made back in the fall into this list:

1. Charterhouse of Parma. Stendhal (haven't decided yet, but I may substitute Dumas' The Three Musketeers)
2. Germinal. Zola
3. Tristram Shandy. Sterne
4. A Sentimental Journey. Sterne
5. Buddenbrooks. Mann
6. Return of the Native. Hardy (although I may wind up reading the top-tier novels in chronological order once I start on Tomalin's bio of Hardy)
7. The Turn of the Screw. James
8. The Brothers Karamazov. Dostoyevsky (maybe I'll feel up to tackling another Dostoyevsky novel by fall, but at the moment I'm not going to commit to it)
9. Robinson Crusoe. Defoe
10. Ward No. 6. Chekhov
11. Doctor Faustus. Marlowe (because we have the opportunity to see the play this spring and Paradise Lost may have been a little too much for me to tackle right now)
12. The Blithedale Romance. Hawthorne
13. The Metamorphoses. Ovid

And I'm going to continue with Proust at least through The Guermantes Way. I have Sodom and Gomorrah on hand in the new translation as well but haven't decided whether I'll order the rest of In Search of Lost Time from the UK or go with the more readily available Moncrieff. And even more importantly, since I read Proust so slowly and cannot always predict when I can focus in on it the way that I should, I'm not inclined to commit to making my way through the remainder of the volumes next year; however far I get is fine.

I intend to resume working chronologically through Rebecca West's novels and I hope to read a few Christina Steads as well. I'd like to return to Patrick O'Brian's Aubrey/Maturin series and touch base with some Southern lit.

We'll see how it goes.