They "let it off" on the steps of their hut. It was early, with the sun just slanting through the cross-crossed needles of the casuarinas which lined the creek. There was dew on the grass and their boots were wet from it. The larme batavique caught the light and gathered it in like molten metal straight from a glassworks' glory-hole. It withstood her father's hammer and her mother's axe. And then Lucinda--it was her birthday, after all--took the needle-nosed pliers and snapped--it took a grunt to manage it--the tail.

Fireworks made of glass. An explosion of dew. Crescendo. Diminuendo. Silence.

There are drugs that work the same, and while I am not suggesting that our founder purchased the glassworks to get more drops, it is clear that she had the seed planted, not once, but twice, and knew already the lovely contradictory nature of glass and she did not have to be told, on the day she saw the works at Darling Harbour, that glass is a thing in disguise, an actor, is not solid at all, but a liquid, that an old sheet of glass will not only take on a royal and purplish tinge but will reveal its true liquid nature by having grown fatter at the bottom and thinner at the top, and that even while it is as frail as the ice on a Parramatta puddle, it is stronger under compression than Sydney sandstone, that it is invisible, solid, in short, a joyous and paradoxical thing, as good a material as any to build a life from. 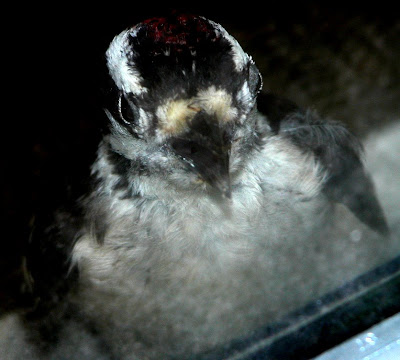 A young woodpecker stunned himself on our back door this morning.

When he didn't object to my taking a few shots without a plate of glass between us, I decided he might need a lift into a low-lying branch. . . 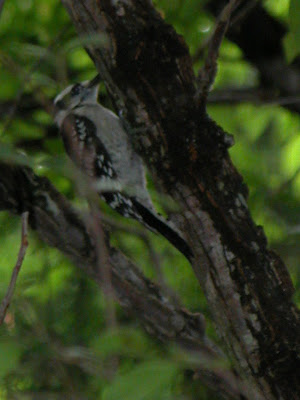 the very idea of which was all he needed to send him soaring up to his usual height.
at May 29, 2008 3 comments:

When Mason Ambrose's nemesis, a writer of anti-Darwinist screeds, asks him in the middle of his dissertation defense (in the middle of chapter 1 in James Morrow's The Philosopher's Apprentice) if God is dead, Mason knows exactly what he should say to skirt the snare that's been placed before him. Instead he opts to keep his self-respect:

"Why," I said, "do our postrationalist theologians, Dr. Pielmeister among them, expect us to prostrate ourselves before a deity who, by the Darwinian insight he claims to endorse, stands exposed as a kind of cosmic dilettante--"

"That is not the language of philosophy," interrupted Pielmeister, wagging his finger.

"--a kind of cosmic dilettante, idly tinkering plants and animals into existence only to have them go extinct from the very environmental conditions he provided for them?"

Delicate but palpable vibrations filled the stuffy air of Schneider Auditorium. The attendees shifted in their seats, delighted that the gladiator had mysteriously elected to insert his head into the lion's mouth. My committee was likewise astir, wondering what demon had possessed this outwardly rational candidate.

"Why," I continued, "was Dr. Pielmeister's presumably competent God unable to produce the contemporary biosphere through any process other than the systematic creation and equally systematic obliteration of countless species?"

Nervous laughter emerged here and there throughout the audience.

"Why," I persisted, "would this same divine serial killer have begun his career spending thirteen billion years fashioning quadrillions of needless galaxies before
finally starting on his pet project: singling out a minor planet in an obscure precinct of the Milky Way and seeding it with vain bipedal vertebrates condemned to wait indefinitely for the deity in question to disclose himself?"

"Right you are," I said. "The show is over. Time to close the concession stand and sweep up the peanut shells. I would rather teach front-end alignment at an auto-mechanics school in Framingham than continue to cast my lot with higher education. And so, with all humility and a deep appreciation for the effort you've expended in
reading my dissertation, I withdraw my candidacy."

Fortunately for Mason, front-end alignment classes aren't in his immediate future; by the end of chapter 1 he'll have accepted a job as private tutor for a young girl with "no moral center," and he'll be whisked away to a situation on a private island that will bring The Island of Doctor Moreau quickly to mind.

I expected to be back to posting as soon as the primary was over, but I didn't count on how exhausted I would be for days afterwards. Or the lower back pain. We voted 896 people on the machines, had 54 provisional ballots cast, and stayed so busy that I didn't even have time to eat an entire bagel over the course of the day. If we don't get both more workers and more equipment in November--well, I don't want to even think about it.

And then I caught a cold, which after five days, still seems to be getting worse instead of better. L. thinks I should go to the doctor, but I'm going to give things another day.

And Something Major happened over the weekend, which will deserve its own post in a day or so--I'm waiting for photographic evidence.

I actually went a week without opening a book.

But on Monday I finished Don Robertson's The Greatest Thing Since Sliced Bread, a book I learned about via Bybee, who counts it as her all-time favorite, and yesterday I started three:
Elizabeth Strout's Olive Kitteredge, Lauren Liebenberg's The Voluptuous Delights of Peanut Butter and Jam, and Julie Hecht's latest story collection Happy Trails to You, which I downloaded to the Kindle immediately after spotting it on Amazon. I'm enjoying all three enormously after a spell of feeling rather "eh" about the books I picked up and I've arranged a shelf with all the ones I'd like to get through over the summer and I've paid my fines at the public library that had blocked me from placing holds there since last summer and I now have three books waiting to be picked up after I leave work this evening.

I didn't intend to sign up for any additional challenges this year; I thought when I copied the list below and bolded the titles that I'd read that I was merely doing it so that I'd have an on-line list for later reference, but now that I've completed the list I realize I should have five additional books finished from this list by the end of the summer anyway, so why not commit to the 1% Well Read challenge? Ten books from the list below before the end of February 2009, with the ones I should complete by the end of August being Silas Marner, Everything That Rises Must Converge, Robinson Crusoe, Les Miserables and Mary Barton. This will be the second year that Maggie has hosted the Southern Reading Challenge. The objective is to read three books by Southern authors between May 15 and August 15.
I need to join another reading challenge like I need a hole in my head, but how can I resist a challenge that gives me both an excuse to issue dead mule alerts and a chance to win a tin of pecans?
I'll be selecting books from this pool:
The Grass Harp. Truman Capote

A Visitation of Spirits. Randall Kenan

Everything That Rises Must Converge. Flannery O'Connor
at May 04, 2008 4 comments: