The Transit of Venus by Shirley Hazzard

A conscious act of independent humanity is what society can least afford. If they once let that in, there'd be no end to it.

--Ted Tice, in The Transit of Venus 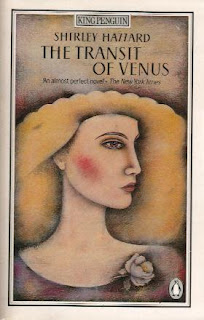 Although I had never heard of Shirley Hazzard before The Great Fire won the National Book Award back in 2003, I was so keen to read it afterwards that I plucked it from a cart down in tech services instead of waiting for it to make its way upstairs and out onto the library floor. It turned out to be a tough read, with its "often oblique writing style, more implication than explanation," as I wrote, after finishing it, at Live Journal. Till then I'd never read such elliptical writing, and while I determined that I did want to attempt The Transit of Venus, her previous novel that she'd published all the way back in 1980, I was of the opinion that Edward P. Jones' The Known World should have won the NBA. I'm a sucker for anachrony, especially flashforwards, and Jones left me swooning with his ability to go forward, backward, all in the same paragraph.

Had I known that Hazzard would hinge the reader's comprehension of what takes place at the end of The Transit of Venus on a couple of flashforwards, I'm sure I'd have quit intending to read it--someday, when my brain's up for it-- and actually read it long before now.

The Transit of Venus requires a lot of effort, a lot of focus, from the reader. Being me, I raced through it in a weekend, pencil both asterisking and underlining excessive sentences and paragraphs for further study. I'd read enough of several reviews to know that the ending tripped people up, that a line on the first page that seemed a throwaway at the time was of vital importance, and with that heightened awareness--somehow, that dead body under the bridge, mentioned briefly in the newspaper, is going to come back up--and my own love for flashforwards, I reached the end with a fairly good big picture understanding of what had taken place. Since then, I've been going back through the pages, rereading what I'd marked and noticing many many other glints of literary gold I'd previously missed, foreshadowings and insights and sentences that made more sense now that I was looking at them from the proper angle. Not that I feel that I've mastered the material, but that I'm sure that it's worth my time to read again.

And it seems a fitting book to be reading now, when I'm also reading A Visit from the Goon Squad (another book that breaks your heart in its flashforwards), so I can think how two writers concerned with what's left out, what's told slant, manage to create characters and stories that aren't reduced to the status of second fiddle.

Please join the Slaves of Golconda discussion of The Transit of Venus here and here.
at April 04, 2011