The Hidden by Tobias Hill

He saw that they had been very kind to him. They had let him into their circle. They were strange children, elder children, who had let him play a game he had never quite understood. There had been rules which no one had explained to him, which he had never really grasped. He had not been grasping, after all. He had never asked much of them. He had asked them questions, but somehow never the right questions. He had put up with Jason's bigotry and Max's stubborn hostility, but most of all with what seemed to be his necessary ignorance. He had needed them, needed to be with them, more than he had wished to know what they kept from him. Even in Pylos, when he had finally demanded answers, he had been content with half-answers. He had cherished his contentment. It had been enough to be with them, even if he wasn't one of them, not really, not one of Us. 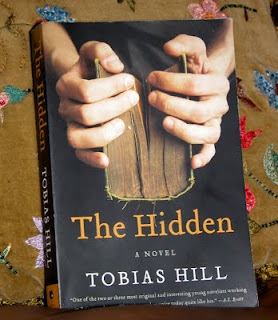 As you might gather from the excerpt above, the main character of Tobias Hill's The Hidden, Oxford archaeology student Ben Mercer, is lacking in the attributes usually assigned to the hero of a thriller. For that matter, Hill's novel fails to meet many of the conventions of the thriller genre, as well, so let me say right up front that whoever decided to market this book as a thriller made a big mistake. This is literary fiction with gorgeous descriptive writing that builds to a thrilling climax and the book deserves to reach an audience that's more amenable to that kind of approach.

In other words, this is a book for the likes of me.

The aforementioned Ben Mercer, who's irredeemably mucked up his marriage and taken himself into self-exile in Athens, takes the first stopgap job he's offered, out at a meat grill in a suburb called Metamorphosis. When Eberhard, a former Oxford classmate who "had a measuring way of looking at the world, where Ben only ever measured himself against it," inexplicably shows up at the restaurant, Ben learns of an archaeological dig taking place on the fringes of Sparta. Ben has been compiling notes towards a thesis on ancient Sparta and is quick to make the appropriate phone calls to get himself hired on to the excavation, despite the classmate's obvious reluctance to have him join the group.

These notes of Ben's, including the transcript of a lecture Eberhard delivered the previous year at Oxford, are interspersed throughout the novel. The notes provide both a fascinating history of Sparta and insight into the ongoing situation at the dig.

The international group Ben longs to be befriended by has styled itself after the Crypteia, a circumspect band of young terrorists who kept the helots, the captive foes of Sparta, in a state of subjection and fear for hundreds of years. While Ben is included in a few of their ritual activities, and seemingly finds acceptance after he shoots a jackal in a secret nighttime hunt, his position is much more naturally that of a helot than a "real Spartan" like the rest.

The Spartans were warriors; the helots did all the rest of the work. The helots and their descendants were the state's merchants; Ben's family has "always been selling something" and Mercer itself means merchant. Names are important in The Hidden and Hill drops many a clue about his characters through them.

As Ben learns more of the group's true purpose and the excavation exposes some unsavory facts about the ancient Spartans, the reader sees the parallels between the terrorism of the past and that in the present. Events and asides and portents from earlier in the book gather import and resonance.

Did the Spartans fear the world outside? Did they guard against its jackals and wolves? Their wall-less city claimed fearlessness. The Spartans had faith in themselves until the day they were destroyed. And yet their faiths themselves--their gods--are full of flashes of terror. If it was not the world without they feared then what was it, unless themselves?

I read The Hidden as part of the TLC Book Tour. Check out the other reviews; I'm disappointed that I'm the only one who's enjoyed the book so far. Perhaps your tastes will align more with my own.
at November 29, 2009