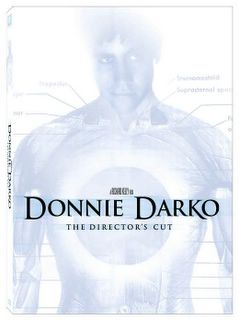 At first S. was too young. Then Nathan Fillion took out Xander's eye in the last season of Buffy and S. deemed it best to avoid all eye injury movies for awhile. Then we waited and waited and waited for the director's cut to come to a theater near us so he could experience it for the first time as it was meant to be seen-which, naturally, happened on a weekend when he had other plans that took precedence.

Last night we finally initiated S. into the family Donnie Darko cult. There was always the possibility that he wouldn't like it, and considering all the elliptical comments he's had to endure since L. and R. and I became obsessive fans, all the playings of "Mad World" he's had to listen to, all the admonishments not to worry if he didn't understand it the first time through-"no one does"-that we didn't mean condescendingly, but sure sounded that way, it's a wonder that he could sit through it, let alone like it.

But he did. All our hype didn't ruin it. He's in the cult! Between the director's cut and Roberta Sparrow's "The Philosophy of Time Travel" at the back of The Donnie Darko Book, he had very few questions-and they were all so very good-- that could not be answered.

Bonus perk: he wants to reread Watership Down. And Graham Greene's "The Destructors."
at April 10, 2005