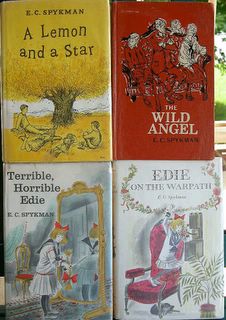 While the rest of the world devoted itself to reading and celebrating the latest Harry Potter (not that I'm too snooty to read it, it's just we're partial to the UK versions and ours won't be delivered for another week to 10 days), I spent my free time over the last few days with my favorite children's novels in honor of their author's birthday.

Elizabeth Choate was born in Southboro, Massachusetts, on this date in 1896. In her mid-thirties she married an educator, Nicholas Spykman (pronounced Speakman), and had two daughters. Her husband died in 1943. She contributed articles to Atlantic Monthly and wrote a history of the first 50 years of the Westover school for girls in Middlebury, Connecticut.

She published her first children's novel, A Lemon and a Star, in 1955. Two years later she published a sequel, The Wild Angel, which was followed in 1960 with the third installment in the continuing saga of the Cares children of Summerton, Massachusetts, Terrible, Horrible Edie. She died in 1965, and her fourth novel, Edie on the Warpath, was published the following year.

That's it-the sum total that I know about the woman who wrote the books that meant the most to me while I was growing up. I have no way of knowing if Jane Cares, whose tenth birthday on June 17, 1907, is recounted in the first chapter of A Lemon and a Star, is based on Elizabeth Choate's young self or if she was, in fact, more like younger sibling Edith, who shares her initials and whose adventures were worthy of two separate volumes, or some combination of the two. Who knows-they-along with brothers Theodore and Hubert--may be whole cloth inventions with no real life counterparts, although the back flap of one of the books claims they all stem from the author's childhood. Perhaps I can get more info by reading Sarah L. Rueter's introduction to The Wild Angel, which was republished by Gregg Press in 1981 (why only the second volume of the series?); I need to place an ILL request very soon.

The Cares themselves grew up in a large house in the country surrounded by dairy farms owned by various aunts and uncles, woods, open fields, swamps, and "reservoir basins that ran in a chain like a quiet river right through town, the family lawns and pastures along their borders." Their father took a train to work each day; "Edie had killed their real mother, as everybody knew, by having to get herself born," leaving the children at home with a house full of servants unable to keep them under control and out of trouble. When the four gain a stepmother near the end of A Lemon and a Star she manages to take the edge off the father's disciplinary excesses but Theodore, Jane, Hubert and Edie continue to run amuck (I first heard the phrase "run amuck" in these books as well as the word "lollapalooza"), having one exciting adventure after another: unauthorized steeplechases, walks across the top of the reservoir, encounters with country thugs and French governesses and foxes and skunks.

By the time Edie takes center stage in the third volume, Ted, Jane and Hubert have toned down considerably, although Ted's temper and bossiness haven't abated. Frustrated by her lack of rights and privileges compared to those of her older brothers, especially when she's continually insulted by the same, Edie feels she must rebel and, at times, take revenge against those who deem her unworthy of consideration. Her best friend Susan, a minister's daughter, tries to teach her to rely on God to supply her needs, although Edie is convinced God is primarily concerned with helping boys, not girls like herself. When the teacher hired to teach Edie and Susan refuses to teach them arithmetic because they are girls, Edie drops all their books out the attic window--certainly not a rational response by today's standards, but Spykman is willing to show her characters both succeed and fail. Edie risks considerable danger at the shore by taking a boat out alone and dares to punch a cop during a suffragettes parade. She eventually manages to prove her worth to her family by a risky manuever with a neighbor's bull.

Occasionally I'll check my stats and see that someone's been here searching for information on E. C. Spykman, so I can't be the only person who read and continues to love these books. Why can't they be brought back into print so that a new generation of readers can fall under their spell?
at July 17, 2005